We’ve already seen what computers are doing to specialist jobs in the world. Years ago, most industries were safe…now, automation has made a lot of that safety redundant. It’s gone. Is this cause for fear?

No! Human beings were meant for so much more than menial tasks that computers can do without thinking. What Buckminster Fuller saw happening in the future was just what has come to pass.

But he saw past the fear of losing jobs.
He saw past the fear of survival.
He believed that human beings were only species that didn’t need to rely on being specialists in something. Humans are comprehensive. We think, we act, we do, we learn. We have a level of consciousness that is creative or even destructive. 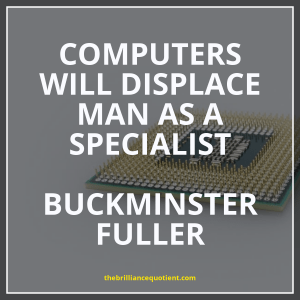 Specialisation is Cause for Concern

Extinction has claimed the lives of certain birds, mammals and insects because these species “specialised” in only one area.

When “that one place” was demolished, what happened to the entire species? Extinction wiped them out.

With computers, automation and robots taking over the boring stuff, we can focus on what we do best…innovate, create and make the world a more effective place for the people who live on it.

Remember, computers will never be as comprehensive as a human being. Use that to your advantage. Be Comprehensive.
That means, being curious about the world around you.
It means being open to learning, listening to new ideas about the world around it.
Often it means trying things out and making mistakes and learning from the mistakes that we make.

Being comprehensive is the reason why we’ve managed to progress as human beings, to reach the technological breakthroughs that we’ve discovered.

Until next time…
Be yourself,
Be Brilliant!