Teaching Children to Become Aware of the Foundations of Trust

This week I’ve had a lot of feedback from parents struggling with certain issues. I started writing various articles that deal with each of these problems. Then I stopped. I began to have a niggling feeling that I was complicating things. Many of the issues that parents face today, come down to a few fundamentals. Trust is one of them. What is behind trust though? A series of agreements. Break that agreement, and many of the problems children face today come straight from this.

The older I become, the more I love agreements. When you vocalise an agreement, you clear up most chances of a misunderstanding happening. But I love agreements even more for the wonders they work with children. In an effort to simplify things, let’s explore one of the fundamentals to communication – agreements. 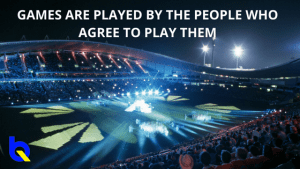 It was only once I started playing Robert Kiyosaki’s Cashflow board game that I realised how important agreements were. In this game you’re constantly striking deals with people and without a verbal or written agreement, it’s easy to forget the deals that you struck at the beginning of the game.

This is one of the reasons why I love games. The rules are clear. If someone wants to play, they must agree to play by the rules. There is this agreement in place. With this agreement, everyone is on the same page. If anyone breaks the rules, there are consequences that will be addressed.

So how does this scenario apply to everyday life? How do we take agreements into every other facet of our days? Is it hard? Is it easy? Does it require a massive amount of effort and concentration? Maybe. But before you throw away the idea of turning everything into an agreement, let’s look at what happens when agreements aren’t made. 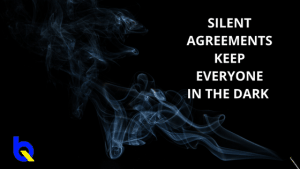 Two weeks ago it was raining. I was fortunate enough to have an umbrella with me. One of my older students asked if she could use it. “Sure,” I said. And I handed over the umbrella.

Two weeks later it was raining again. Harder this time. I needed my umbrella, but it was gone. It was then that I remembered that I’d given it to my student. I found her and asked where my umbrella was. “Hmmm, I don’t know,” she said, with a look of surprise on her face. “It may be in lost property, though.”

I was angry with her. However, the real person to blame in this scenario was me. I had given her the umbrella with a silent agreement. An unspoken agreement. The agreement was based on every other interaction we’d had for years: this is my umbrella. It belongs to me. If I let you use it, I expect it back as soon as you are done with it.

Except all of this went on in my head. Right now, the umbrella is still missing. Do I have the right to be angry and irritated? Yes. Can I blame my student? Maybe. Should I take responsibility? Completely! The Unspoken Agreement is the limbo where our resentments live. 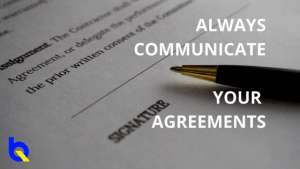 Agreements keep people accountable. In my early days of teaching, I didn’t have them in place. When market days came round, children would ask if they could use my class to sell their products. “Of course, as long as you promise to clean up afterwards,” I said.

“Of course!” they replied. Holding them to this agreement was another story altogether. At the end of the market day, the last thing these children wanted to do was clean up.

I learnt very quickly that written agreements with consequences clearly articulated are powerful. If you can get someone to look at a written agreement with wide eyes and still agree to the conditions, then you know you’re on the right track.

When I started creating clear, verbal and written agreements one of two things happened. Either the children cleaned up and honoured the agreement. Or they broke the agreement. At that point, we both knew where we stood. The beautiful thing was that I had fulfilled my end of the bargain by clearly articulating what I expected from them. 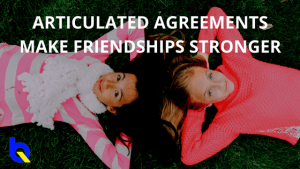 Every child has an agreement with their friends. They just don’t know it. These agreements are expectations. And these expectations are mostly behaviours. Every child wants to be treated a certain way and expects someone to treat them that way.

In my experience, one of the biggest causes of conflict between friends and children in general is a lack of clear agreements.

Teaching Your Children How to Articulate Agreements 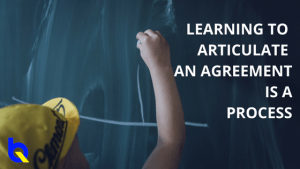 A simple way of explaining agreements to your child is to compare them to games. Every game has a set of rules. If you don’t like the rules of the game, you don’t play. The same thing applies to friendships and just about every other relationship they have.

Here are a few questions to start with when teaching your children how to create their own agreements:

You’ve now laid the foundation to explain that agreements and clarity about the agreements create trust. Why? Because when other people follow the rules of a game, they show us, through their behaviours, that they can be trusted. Trust is then developed over time.

Now you’re ready to start the next step: talking about taking agreements into friendships.

You are bound to receive interesting answers from your child. From my experience, children aren’t aware of the power of the silent agreements they have with their peers and their friends. By asking them these questions, you’re starting to build up their awareness around their responsibility to communicate to others. Your children begin to understand that they’re responsible for explaining how they want to be treated. Your children also begin to see that they need to learn how others want to be treated.

I hope this helps you as much as it has helped me.

Until next time.
Be yourself.
Be Brilliant!

PreviousReasonable and Unreasonable Children
NextLessons from the Trail