What Nelson Mandela Can Teach Us, Going Into 2017 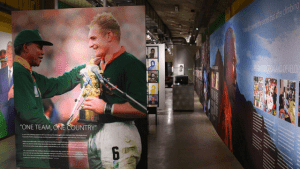 I re-watched Invictus again today, and once again the lessons have hit home. Yes, it’s a fabrication of one great man(Nelson Mandela), played by another great man (Morgan Freeman). But there’s substance to everything Nelson Mandela says. Spending 27 years in prison didn’t break him. Like a diamond, the pressure turned him into something exceptional. It’s no wonder that, years after his passing, the world still misses him.

But that’s not what we’re here for. We can’t dwell on the past. All we can do is learn from it. There’s a critical part in the film, where Nelson Mandela is watching a rugby match between South Africa and England. It’s almost a full year before the 1995 Rugby World Cup is due to be hosted in South Africa. The Springboks are playing terribly in this match, and England is wiping the floor with them.

Nelson Mandela drifts into one of those pensive reflections, almost looking through the rugby game. He points his binoculars to different places in the crowd as the game ends.

“Look at that,” he says. “The whites are supporting the springboks and the blacks are supporting England. We used to do that on Robben Island. It drove the guards crazy.”

Now the average person would’ve left the thought there, especially one so busy rebuilding a country. But Mandela realised that human nature is universal. That mistakes are history’s patterns. What he was doing in prison years ago, was now happening right here in this very stadium. Was that freedom? In that one moment, Madiba saw South Africa’s gaping wound. Here was a country divided by a sports team, because it was interpreted as beloved by one race, and oppressive by another.

Nelson Mandela went on to do all he could to turn that interpretation around. He helped give it new meaning, and with it, he united a nation. The Springboks won the final of the Rugby World Cup a year later, beating New Zealand by the narrowest of margins, in a game filled with bravery, endurance, passion, hope, joy and pride. No matter which part of South Africa you were in, no matter the colour of your skin or religion, when that final whistle sounded South Africa erupted in an earth-shattering moment of joy. People of all colours embraced. They danced and sang well into the night. They cried and smiled, together.

The Moment He Saw The Lesson

Let’s go back to that moment, where Nelson Mandela is sitting in the stands, a year before the 1995 Rugby World Cup. He’s thinking back to his incarceration and how he supported any team that played against The Springboks. Let’s imagine there’s a moment where everything pauses and the realisation begins to wash over him. Nelson Mandela sees how, time’s may change, but actions remain constant.
And he stops.
Because he knows he can stop.
He stops because he wants to end the needless suffering of a nation.
First he owns the part that he played in this history, forgives himself and then he makes a different decision.

The Lesson That Will Redefine 2017 For Us

If we do this we have a chance at a changed future. If we don’t we’re just going to show, again, that history repeats itself.
The choice is mine.
The choice is yours, too.
We lie on the cusp of another year. What choices will you make?

PreviousLife Lessons from Plants (Part 1)
NextHow to Escape the Room